Sudan, who was 45, lived at the Ol Pejeta Conservancy in Kenya. He was put to sleep on Monday after age-related complications worsened significantly.
His death leaves only two females – his daughter and granddaughter – of the subspecies alive in the world.
Hope for preserving the northern white rhino now lies in developing in vitro fertilisation (IVF) techniques.
“His death is a cruel symbol of human disregard for nature and it saddened everyone who knew him,” said Jan Stejskal, an official at Dvur Kralove Zoo in the Czech Republic, where Sudan had lived until 2009.
“But we should not give up,” he added in quotes carried by AFP news agency.
“We must take advantage of the unique situation in which cellular technologies are utilised for conservation of critically endangered species. It may sound unbelievable, but thanks to the newly developed techniques even Sudan could still have an offspring.” 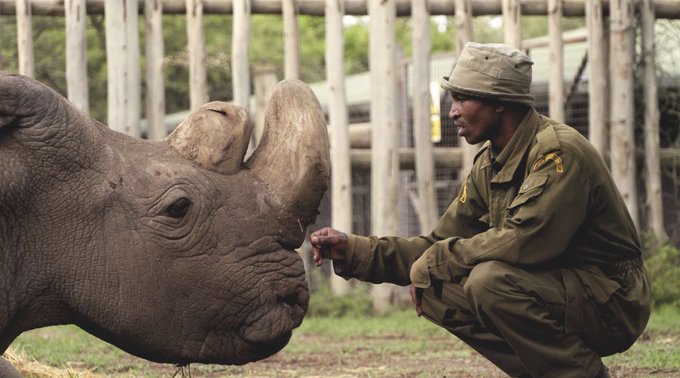 Why is this kind of rhino so rare?

Rhinoceroses – of which there are five species – are the second-largest land mammal after elephants. The white rhinoceros consists of two sub-species: the southern white rhino and the much rarer and critically endangered northern white rhino.
Sudan, who was the equivalent of 90 in human years, was the last surviving male of the rarer variety after the natural death of a second male in late 2014.
The subspecies’ population in Uganda, Central African Republic, Sudan and Chad was largely wiped out during the poaching crisis of the 1970s and 1980s. Poaching was fuelled by demand for rhino horn for use in traditional Chinese medicine, and for dagger handles in Yemen.
The last few dozen wild northern white rhinos in the Democratic Republic of Congo had been killed by the early 2000s.
By 2008, the northern white rhino was considered extinct in the wild, according to WWF, the global environment campaign.

What did Sudan die from?

The elderly rhino was being treated for degenerative changes in his muscles and bones, combined with extensive skin wounds.
Unable to stand up and suffering a great deal in his last 24 hours, Sudan was put down by veterinarians at the Ol Pejeta Conservancy.

Is there any prospect the subspecies could survive?

In 2009, the four remaining northern white rhinos, two males and two females, were transferred from the Czech zoo to Ol Pejeta in Kenya.
The hope was that the new environment, reflecting their native habitat, would encourage breeding.
However, there were no successful pregnancies and Sudan was retired from his role as a potential mate four years ago.
Other attempts to conserve some of the northern white rhino genes by mating 27-year-old Najin and her 17-year-old daughter Fatu with a southern white male also failed.
An account was created for Sudan on the dating app Tinder last year, not to find love, but to help fund the development of IVF for rhinos.
The move won him fans across the world – fans who will now be mourning his death and the northern white rhino’s proximity to extinction.
Sudan’s genetic material was collected on Monday, conservationists said, to support future attempts to preserve the subspecies.
The plan is to use stored sperm from several northern white rhino males, and eggs from the remaining younger females, and implant the embryo in a surrogate southern white rhino.
Rhino IVF is a radically new procedure and could cost as much as $10m (£7.1m). It still gives conservationists hope that Najin and Fatu will be able to have their own calves one day.

How is the world reacting?

News of the loss of the world’s last male northern white rhino has travelled far.
People including Kenyan politicians and YouTubers have posted pictures of themselves meeting Sudan on the reserve where he lived out his remaining years.
Indian cricketer Rohit Sharma and former WWE wrestler Daniel Bryan shared their sadness with the hashtag #wedidthis.
Many, including a British teenaged conservation activist, blame humans for the subspecies’ imminent extinction and are calling for attention to be refocused on saving other rhino species before it is too late. 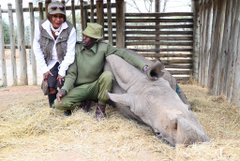 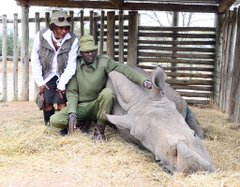